This week, a major storm, called a macroburst, hit parts of RI and CT. With little warning, severe thunderstorms hit our state, Rhode Island, at 6:00 a.m. on Tuesday, August 4th, with sustained winds of over 80 miles per hour. Trees were uprooted, telephone and electric poles toppled and power was interrupted for more than 100,000 people in Rhode Island alone. Our city, Warwick, was one of the hardest hit. Fortunately, no one in Warwick was seriously injured. Unfortunately, the storm caused us to lose power for 3 and 1/2 days. No ac, no lights, no hot water, no ability to cook (always wanted a gas stove!), and no refrigerator. In the office, we had to work without the computer, voicemail, lights and ac.

Here is a glimpse of what happened:

It’s unsettling when unexpected events like this happen. In our current home in Warwick, power outages have never lasted longer than a few hours, and we hoped that would be the case this time. As the severity of the situation became more apparent, we did a few things that were helpful.

There are several flashlights in our home that we use all of the time, as well as a bunch of flameless candles and an Old Brooklyn Lantern (as seen on TV!). It was helpful to gather them all in one spot so they were available when needed.

Other than in the car, we don’t listen to the radio that often. Our old battery-operated boombox has a radio. We dug it out of our storage space and managed to scrape up the six “C” batteries needed for the radio by pulling them out of other items. The radio helped to keep us informed and entertained throughout the week.

Dinner the first night without power was tuna and some mayo, which was still cold and safe to eat. Dinner on Wednesday and Thursday came from restaurants. Crackers, peanut butter, soda, cereal and other shelf stable items (cookies!) were picked up for quick snacks and lunches.

Like many of us, Roy needs his coffee or tea in the morning to get going. With no electricity, that became a challenge. He put 8 teabags in a half-gallon pitcher of water and let the heat of the sun work its magic for only an hour. The tea was strong enough to get Roy moving and be less cranky. If it’s raining, use the same method indoors – it will give enough of a caffiene jolt to do the trick.

Unfortunately, we had to throw out a lot of our refrigerated foods. Here is a link with advice on what to keep and what to toss in the event of a power outage.

Before too long, our cell phones were out of juice. Kevin’s sister, Chris, suggested that we get a cell phone charger for the car, which was an unknown item to us. We were lucky there was still one left at our local Target store. It worked great and cost under 20 dollars. They also sell battery-operated radios with built-in cell phone chargers.

Our regular home phones are cordless, which means they don’t work in power outages. We used our classic Harley-Davidson motorcycle phone (pictured below) which plugs directly into the phone jack. (Sadly, the batteries for the “Vrooom Vrooom” ring tone were being used for our radio!)

We lost Roy’s hand-painted flowerpot in the storm. This pot was made for the Mother’s Day blog post. All the other plants fared well! The tomatoes continue to be plentiful and we have a couple of new pansy blooms. 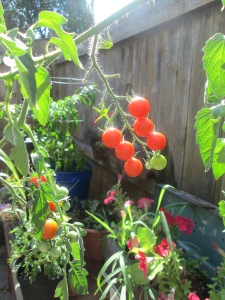 At least 60 tomatoes and 10 peppers were harvested this week. We made a shrimp and pasta dish using our garden veggies and basil Friday night to celebrate getting our power back. 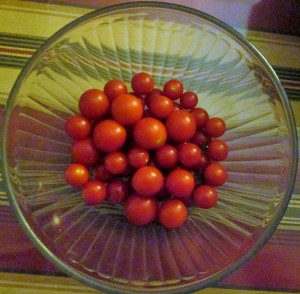 CASH Several of the banks in our area lost power for a couple of days, meaning ATM machines were down. If you can, have a kitty at home with some emergency cash when banks aren’t available. Power outages are expensive – lost food, eating out, buying batteries, etc.

EMERGENCY SHELF We had most of the supplies we needed, but they were not in one place. Now, we have a shelf in our linen closet designated for emergency supplies – batteries, flashlights and other light sources, first aid kit, battery-operated radio, wall phone, cell phone charger, non-Dixie brand paper plates and cups, etc. (The picture above was staged for your viewing pleasure!)

Here is a great website for emergency readiness information

it was a tough few days, but we enjoyed some things as well. Going out to dinner midweek, which is something we don’t often do, was a treat. Gift cards came in handy! Another highlight was the last night without power, listening to top 40 radio, eating takeout food by the light of our Old Brooklyn Lantern. This has inspired us to have a weekly “unplugged” night – no TV, computer or cell phone. Board games, cards, music and re-connecting will be the focus.